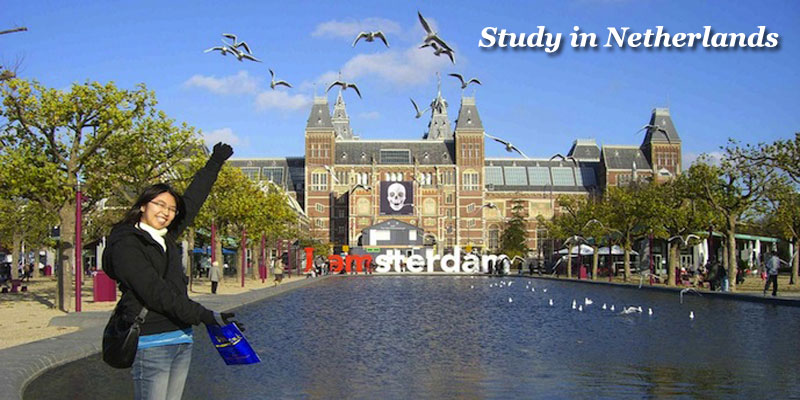 The Netherlands is also a unique non-Anglophone country, where approximately 95% of locals speak English. This factor makes living, studying, and working in the Netherlands very convenient, comfortable and pleasant for international students. The Netherlands is also very open and tolerant, welcoming everyone to share their opinions and express themselves. This is very much encouraged during your studies.

Studying in the Netherlands is not that expensive, compared with other English-speaking countries such as the UK or US. Dutch higher education is subsidized by the government and tuition fees are relatively low. With the country’s renowned standard of education and comparatively low cost of living, studying in the Netherlands will give you true value for money. Annual tuition fees for a degree program or course at a Dutch higher education institution start at approximately €1,900 for EU students and €6,000 for non-EU students, depending on the institution.

Further, if you decide to have a job alongside your studies, you can also declare these expenses, and get some money back from taxes. How cool is that? In addition, many Dutch universities offer grants and scholarships that can reduce or fully cover the tuition fees of study programs.

The Dutch educational system is of high quality and Dutch universities are acknowledged worldwide for their well-designed, modern courses and facilities. The teaching style focuses on teamwork, which makes it easy for international students in the Netherlands to meet Dutch people as well as other international students.

Compared with other western European locations, the cost of living in the Netherlands is relatively low. If you are a EU student, you can work 32 hours a month and be eligible for a €265 grant and a student OV-Chipkaart for free public transportation either during the week or weekends.

As a student, you can also get discounts in many bars, restaurants, museums and cinemas. You can get around town easily on a bicycle. This is not only typically Dutch, but also a cheap means of transportation. You should definitely ask for an ISIC Student Card to get many more benefits and discounts.

The Netherlands also has a well-developed and connected transportation system, and various discounts for students make travelling quite affordable. As mentioned, when working 32 hours a month, you can also get a student OV-Chipkaart, which gives you access to free public transportation. This makes it very convenient and cheap to explore the whole country. Further, you will love how easy it is to get around with a bike – the preferred means of transportation of the Dutch, and also the cheapest. You can cycle in peace, confidence and tranquility, as there are dedicated roads for cyclists.

The Netherlands has also been recognized as a knowledge center with rich study traditions and well-known universities. Scientific research at Dutch universities is very highly valued at both the national and international level. Education in the Netherlands meets all international standards and is well-reputed worldwide. A diploma from a Dutch university provides an opportunity to start one’s own business and can be very useful in terms of having a successful career in any country of the world.

Please send your documents to us through email (info@globalvisionbd.com) to check the eligibility to study in NETHERLANDS. One of our team members will contact you for detail information.

Confirming the eligibility come to our office and meet a counselor to get details about your application process, scholarship options, steps of application, budget and others.

To apply to any country requires necessary payments. If requires please pay the necessary fees to process your application.

Every Embassy / High Commission / VFS / Consulate has individual documents list to submit for visa. In this stage, prepare your documentation to submit for visa with proper guideline from our expert visa processing team as it meets the requirement of NETHERLANDS.

After your preparation submit your documentations to the concern Embassy / High Commission / VFS / Consulate ONLINE to issue the necessary visa prior to your travel. Please don’t forget to be well dressed and prepared to answer basic / necessary questions related to your visa application.

It is important to study the Temperature, Food, Culture, Transportation and other necessary knowledge about your destination. Take some necessary medicine as well which can be helpful in the new environment. To get detail information, attend Pre-Departure Briefing in our office.

Take important documents with you, answer questions of the Immigration Officer gently and carefully, take necessary money with you and fly for JAPAN.